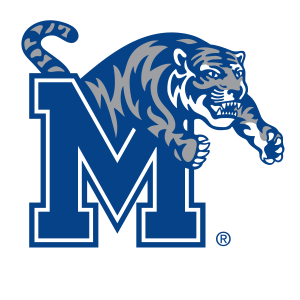 Get your Memphis football tickets for the upcoming NCAA Football college football season! As the official ticket resale marketplace of the Memphis Tigers, TicketSmarter has a great selection of premium seating options for all U of M games. The University of Memphis began fielding a college football team in 1912. The team plays in the NCAA Division I FBS and joined the AAC before the 2014 season.

Throughout the team's history, they have won multiple conference championships in the Southern Intercollegiate Athletic Association, Missouri Valley Conference, and most recently the American Athletic Conference. In addition to the conference titles, the Tigers have won more than 450 contests with over 10 NCAA college bowl game appearances. The team’s main rivals include Arkansas State, Louisville, Ole Miss and Southern Miss, but opportunities to play these teams are infrequent due to current conference alignments. Secure your Memphis football tickets today to cheer on your team to an American Athletic Conference Championship!

Several factors can come into play that affects the ticket prices for Memphis Tigers football games. The number of games left in the season, the team’s win-loss record, the strength of opposing teams, whether opponents in-conference or out-of-conference and the seating location are all variables that must be taken into account when looking at tickets for upcoming games.

How much are Memphis Tigers Football tickets?

Memphis football tickets are very reasonably priced with prices starting around $25 to $50 for most games. Certain big in-conference matchups may start in a range close to $90. Tickets located close to the sideline near the 50-yard line may be priced at $150 or over. Seats located closer to the field and closer to the 50-yard will always be more expensive than seats higher up or located near the endzones.

Ticket prices for the current Memphis Tigers Football football season are starting at $11.00 and going up to $539.00. The average ticket price per game during the current season is around $75.70. Memphis Tigers vs. Temple Owls tickets are currently available on TicketSmarter. This gridiron battle will take place at Simmons Bank Liberty Stadium, 335 South Hollywood St, Memphis, TN on October 1st, 2022 at 11:00am. TicketSmarter has 303 tickets currently available for this big matchup with starting ticket prices at $16.00 and the most expensive seats priced at $119.00.

The University of Memphis football team begins the NCAA regular season in late August or early September. The season lasts through November with 12 matchups with teams both in-conference and out-of-conference. Half of these games will be played at Liberty Bowl Memorial Stadium, the home of the Memphis Tigers, while the others will be played at the opposing team’s stadiums. Memphis plays in the West Division of the AAC and can gain an opportunity to play in the American Athletic Conference Football Championship Game held in December by winning their division. Memphis can play in NCAA bowl games held in late December and early January by winning six regular-season matchups to become bowl eligible.

The Memphis Tigers Football schedule has a total of 8 football games left to be played during the season. One of the highlights of the football season will be the Southern Methodist (SMU) Mustangs vs. Memphis Tigers game at Gerald J. Ford Stadium, 5800 Ownby Drive, Dallas, TX. The game is scheduled for November 26th, 2022 at TBD making it one of the final games of the season. Wanting to watch this game in person? Be sure to grab one of the 1253 tickets available on TicketSmarter with prices ranging from $18.00 to $278.00.

When do Memphis Tigers Football tickets go on sale?

Memphis Tigers home football games are held at Liberty Memorial Stadium. The venue is located in Memphis near the Midtown area. It first opened in 1965 and was originally known as Memphis Memorial Stadium. The stadium features a total seating capacity of 58,325 and the field’s playing surface is a modern AstroTurf. Liberty Memorial is a classic college football bowl, with a single level of seating that surrounds the entire field. Extra rows of seating sprawl out of the bowl on the sidelines with fewer rows available in the endzones.

Need help picking out the perfect seats for your next Memphis football game at Liberty Memorial Stadium? TicketSmarter’s interactive seating map acts as a virtual ticket office that can help you pick out tickets for the next big game. Click on the game you’re interested in and a detailed seating chart will highlight each section with tickets available. You can also use the filter tool to sort ticket options by price, section and row.

TicketSmarter wants you to have an easy and worry-free experience when buying Memphis Tigers football tickets online. As the official ticket resale partner of the Memphis Tigers, we provide a safe and secure web platform for all NCAA collegiate athletic events. We use the highest standards in the ticketing industry to ensure your personal information remains protected during all ticket transactions.

All TicketSmarter tickets are 100% guaranteed. Verified customers rate TicketSmarter 4.6/5.0 stars, so you can order with confidence knowing that we stand behind you throughout your Memphis football ticket buying experience.