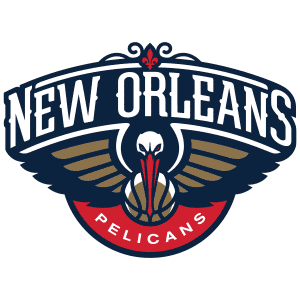 Soar above your opponents with New Orleans Pelicans tickets. The Pelicans came from Charlotte and were known as the Hornets. They started playing at the New Orleans Arena, now the Smoothie King Center, in October 2002. Their first game was against the Utah Jazz.

After Hurricane Katrina in 2005, this NBA team moved to Oklahoma City and became the New Orleans/Oklahoma City Hornets for two seasons. Their first basketball game after the Storm was in March 2006 against the Los Angeles Lakers. It was a sellout crowd of 17,744.

The team announced in 2013 that they were changing their name to become the New Orleans Pelicans. Since their move from North Carolina, the Pelicans have produced a 671-771 record. They have qualified for the NBA Playoffs a total of seven times. The Pelicans claim one division title win, coming in 2008. They play in the Western Conference as a member of the Southwest Division.

New Orleans drafted Zion Williamson as the first overall pick in the 2019 NBA draft. After missing half of 2019, Zion made his debut to a sold-out crowd. The Pelicans played well with Zion in the lineup and the team immediately felt his impact. Demand for tickets has skyrocketed since Zion has been able to take the court with the Pelicans looking like a playoff-caliber team. The Pelicans play at Smoothie King Center which is located at 1501 Dave Dixon Drive, New Orleans, LA 70113. Catch all of the hype with New Orleans Pelicans tickets from TicketSmarter today.

New Orleans Pelicans ticket prices at the Smoothie King Center can range depending on who the Pelicans are playing. If the game is a preseason game or an exhibition game, those tend to be cheaper. Sitting in the 300 level section can also result in cheaper New Orleans Pelicans ticket prices. In the arena, there are courtside seats as well as numerous suites. With the addition of Zion, the Pelicans seats are a hot ticket. Be sure to check out the Pelicans seating chart from TicketSmarter where you can sort by price or location.

How much are New Orleans Pelicans tickets?

Tickets for a home Pelicans game start at $10 per seat. While Pelicans tickets can exceed $130, the average ticket price is usually $48. For postseason action, those tickets tend to cost more money.  Center court seating in sections 101 and 112 in the first few rows can be expensive especially with the addition of Zion Williamson. Expect ticket prices for those seats to exceed $200 per ticket with courtside seats exceeding $300.

New Orleans Pelicans tickets for the current basketball season can be found at prices between $70.00 and $941.00, while the average price per game this season is around $199.00. Next up for the team is the NBA Preseason: New Orleans Pelicans vs. Atlanta Hawks game at Legacy Arena at The BJCC, 2100 Richard Arrington Junior Boulevard North, Birmingham, AL. The basketball game is scheduled for October 14th, 2022 at 7:00pm and TicketSmarter has 166 tickets available for the event. Fans looking for cheap NBA Preseason: New Orleans Pelicans vs. Atlanta Hawks tickets can find them starting at $70.00, while the more expensive seats in the arena for the game can go for prices as high as $941.00.

The Pelicans play an 82 game schedule in the Southwest Division of the NBA Western Conference. Their most common opponents are fellow conference members such as the Houston Rockets, Dallas Mavericks, Memphis Grizzlies, and San Antonio Spurs. NBA starts its schedule in October and lasts through April. If the Pelicans earn an NBA Playoffs bid, those start after the season concludes. If there a particular matchup that you wish to attend, explore the full New Orleans Pelicans schedule from TicketSmarter.

The New Orleans Pelicans schedule has 2 basketball games left to be played during the current season. Fans have the 2022-2023 New Orleans Pelicans Season Tickets (Includes Tickets To All Regular Season Home Games) game at Smoothie King Center, 1501 Girod Street, New Orleans, LA marked on their calendars. The basketball game will take place on October 17th, 2022 at TBD and there are 0 ticket listings currently available on TicketSmarter with prices ranging from $0.00 to $0.00.

When do New Orleans Pelicans tickets go on sale?

Tickets are released to the public after the NBA has released the upcoming Pelicans schedule. This typically occurs in the late summer for the season starting in October. NBA Postseason tickets are sold after the New Orleans Pelicans earn an NBA Playoff bid.

Known as both the Blender and the Nest, the Smoothie King Center is home to the New Orleans Pelicans. It is located next to the Mercedes-Benz Superdome in the CBD (Central Business District) in New Orleans. When it opened in 1999, it had an expandable seating capacity of 18,500. The arena has 2,800 club seats and 56 luxury suites all situated on the 200 level. There is also the HUB Club which is located on the west side of the Smoothie King Center. This all-inclusive super suite offers basketball goal views along with multiple buffet tables and drinks. The Party Perch is located in the middle of section 323. There are also courtside seats available bringing you even closer to the action. The best seats are located in sections 111 through 114 as those are directly behind the team benches. The full New Orleans Pelicans seating chart can be accessed online using the TicketSmarter interactive tool.

Ordering through TicketSmarter’s easy online process of purchasing NBA tickets, ensures that you will always be able to find a great deal on authentic New Orleans Pelicans basketball tickets. We value your business and maintain the highest industry standards of customer service to assure your safety and satisfaction when making your purchase just as if you had purchased from the Pelicans ticket office.

All TicketSmarter tickets are 100% guaranteed. Verified customers rate TicketSmarter 4.6/5.0 stars, so you can order with confidence knowing that we stand behind you throughout your New Orleans Pelicans ticket buying experience.