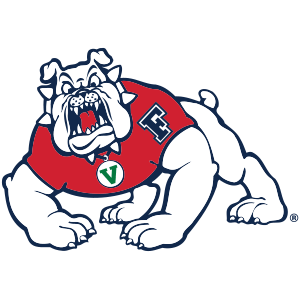 Buy Fresno State Football tickets online and enjoy watching one of the best football teams on the west coast take on top-tier opponents. The Bulldogs are known across the country for their strong football program, which has won 26 conference titles for just over 100 years of playing football.

The Bulldogs currently reside in the Mountain West Conference, where they have won the west division four times and the conference title on two occasions. Fresno State has made 28 bowl games in its storied history, going 14-14 in those contests through the 2019 season. Fresno is also the only Group of 5 teams to record three straight bowl wins against Power 5 opponents.

See the next Bulldog superstars in action by purchasing Fresno State Football tickets today. TicketSmarter’s safe and secure web platform will make it easy to buy seats online and avoid the gameday lines at the ticket office.

Fresno State Football ticket prices will vary for every game. The opponent, time of year, and weather play major factors in ticket pricing. You can typically find less expensive tickets around the beginning of the year for games against non-conference opponents. Bulldog football tickets will cost much more for games against top teams like Utah State or rivals like San Jose State.

How much are Fresno State Football tickets?

Fresno State tickets start at about $12 for a regular-season game. The average cost for a ticket is about $42. Seats closer to midfield will generally be more expensive while those in the corners or the end zone are likely to be cheaper. Find an excellent price on football tickets with TicketSmarter.

Fans looking for Fresno State Bulldogs Football tickets online can find them on TicketSmarter for every game of the season. Ticket prices for the current season are starting at $8.00 and going for prices as high as $588.00. The average ticket price per game this football season is $76.50. There are 4052 Jimmy Kimmel LA Bowl: Fresno State Bulldogs vs. Washington State Cougars tickets available on TicketSmarter for the upcoming game on December 17th, 2022 at 12:30pm. Fans can score tickets for the game at prices between $40.00 and $4053.00. Grab your tickets today and cheer on your favorite team at SoFi Stadium, 1000 South Prairie Avenue, Inglewood, CA.

Fresno State top Group of Five teams to Bulldog Stadium in both Mountain West and non-conference play. The team hosts teams like San Diego State and Nevada during MWC play. Don’t miss the annual matchup with rival Boise State either. In non-conference play, the Bulldogs bring squads like BYU and New Mexico State to Fresno. The team has also hosted Power Five opponents like Oregon State and Minnesota.

When do Fresno State Football tickets go on sale?

TicketSmarter will have Fresno football tickets on sale shortly after the team and the Mountain West release the schedule. Schedules are generally released in January and February with season tickets available first and single-game seats on sale later in the year.  Bookmark this page to ensure you are one of the first people to snag college football tickets when they go on sale.

Fresno State has called Bulldog Stadium home for more than 40 years. The facility is known as one of the best in the Mountain West, seating 40,727 fans and giving everyone a great view of the action. The stadium is built in a bowl style with seats located closer to the game than many other facilities. This provides an excellent gameday atmosphere for Bulldog fans.

Seats near midfield can be found in sections 10-12 and 30-32. Celebrate a touchdown with the players by grabbing end zone seats in sections 19-24. Sky suites and other premium seating options are also offered at Bulldog Stadium. Lockdown a seat with TicketSmarter. Our interactive seating chart will help you click through available Bulldog Football tickets to find the best seats.

We understand that purchasing Fresno State Bulldogs football tickets online requires a great deal of trust. You need to be certain that the tickets you purchased are legitimate while also verifying that your personal information remains confidential. That’s why TicketSmarter designed our website while using industry-standard security protocols to ensure that you will remain safe and secure when grabbing Fresno State football tickets online.

All Fresno State tickets purchased with TicketSmarter are 100% guaranteed. Verified customers rate TicketSmarter 4.6/5.0 stars, so you can shop and order with confidence knowing that we stand behind you throughout your Fresno State Football ticket buying experience.