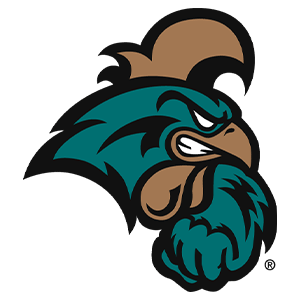 Enjoy watching one of college baseball’s most consistent winners by purchasing Coastal Carolina baseball tickets with TicketSmarter. The Chanticleers produced one of the sport’s great Cinderella runs to win the 2016 National Championship after years as an NCAA Tournament regular and regional powerhouse. The Chants compete in the Sun Belt Conference, and fans pack Springs Brooks Stadium for important series’ against teams like Louisiana and Southern Miss.

Coastal Carolina made its second NCAA Regional appearance in 2001 and established itself as one of the region’s best teams by making 15 of 19 tournaments between 2015 and 2019. The Chanticleers' most famous tournament run came in 2016 when the unseeded team won the national title. Coastal took down No. 9 seed NC State in the regionals, swept No. 8 seed LSU in the super regionals and then ousted two more seeded teams in the CWS to win the national championship.

The Chanticleers have produced multiple alumni that went on to play professional baseball, including former Tampa Bay Rays and Seattle Mariners infielder Taylor Motter and former Los Angeles Angels infielder Tommy LaStella. Fans who buy Coastal Carolina baseball tickets can watch future professionals in action as they compete for Sun Belt and national titles in Myrtle Beach. Secure college baseball tickets with TicketSmarter to be at Springs Brooks Stadium for every pitch this season.

Coastal Carolina Baseball ticket prices will vary based on the opponent and seat location. Seats will be in high demand for games against top-tier opponents, so you will want to secure those early to avoid late cost increases.

How much are Coastal Carolina Baseball tickets?

When do Coastal Carolina Baseball tickets go on sale?

Coastal Carolina Baseball tickets normally go on sale in December after the team’s schedule is released. Postseason tickets will be available as soon as the NCAA announces the tournament field in late June. Use TicketSmarter’s up-to-date schedule to snag your college baseball tickets.   Coastal Carolina Chanticleers vs. Marshall Thundering Herd tickets are now available for the final game of the year, which will take place at Vrooman Field at Springs Brooks Stadium, 965 One Landon Loop, Conway, SC.

College baseball facilities vary in size, but most have a capacity of around 2,000 to 5,000 people. Some of the best seats at any ballpark will be located right behind home plate while fans who want to come home with a souvenir should look for spots in foul ball territory down the lines. Most college stadiums also include some family-friendly grass seating in the outfield or down one of the lines. Some schools will also have suites or club spots available as premium seating options. Secure Coastal Carolina Chanticleers Baseball tickets for home or away games at any facility with TicketSmarter’s dynamic seating chart.

The Coastal Carolina Baseball team will play at several college ballparks throughout the year. The next game on the Chanticleers schedule will be played at Vrooman Field at Springs Brooks Stadium in Conway, SC. Every game of the season will have an accurate Coastal Carolina Chanticleers Baseball seating chart that will accurately display the available seats for every home and away game.

You can buy Coastal Carolina Baseball tickets stress-free when you shop through TicketSmarter. Our top-notch data security standards will keep your information safe when you buy online. Our customer service team is also always ready to answer questions and speak to any concerns you might have. Every purchase is guaranteed, so your sporting event tickets will be authentic every time.

College baseball tickets are 100% guaranteed when you purchase with TicketSmarter. Confirmed customers grade TicketSmarter at 4.6/5.0 stars, so you can order with confidence knowing that we stand behind you throughout your Coastal Carolina Chanticleers Baseball ticket buying experience.