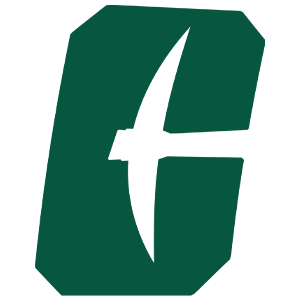 Charlotte 49ers tickets allow you to enjoy competitive rivalries within Conference USA. Some of the 49er's rivals include Memphis, Marquette and the Cincinnati Bearcats. The Charlotte 49ers men's basketball team is their most storied team with several conference championships and over 10 appearances in the NCAA March Madness Tournament. In 2013, the Charlotte 49ers fielded a varsity football team for the first time since the original program ended in 1948. The football program has already found success, appearing in their first bowl game in 2019 and producing multiple NFL Draft picks.

Several factors will have an impact on Charlotte 49ers ticket prices throughout the school year. Some sports on campus will be more popular than others, which will affect the supply and demand of available tickets. Other variables that must be considered are the size of the sports venue, the seating location inside the venue, how well the team is performing and upcoming opponents on the Charlotte 49ers schedule.

How much are Charlotte 49ers tickets?

Sports on campus will have different price points that will affect how much Charlotte 49ers tickets will cost for each respective sport. Football is generally the most popular sport on most college campuses with tickets for non-conference games starting around $25. Premium seating options at football games on the 50-yard line will usually start in the $100 to $200 price range. Basketball tickets are usually cheaper with tickets in the $20 to $50 range. Fans looking for cheap Charlotte 49ers tickets should check out the upper-level seating sections.

The Charlotte 49ers schedule revolves around the school year and is filled with great collegiate sports. The school year starts with popular fall sports such as football and women’s volleyball along with soccer and cross country for men and women. The regular seasons for these sports generally end around November with postseason play taking place in November and December. The highlight of the fall sports calendar is the NCAA Bowl Games that take place in December and January.

Baseball and softball are the biggest sports held during this time period. Golf, lacrosse, outdoor track and tennis are also spring sports that are sponsored by most universities for men and women. The NCAA College World Series at TD Ameritrade Park in Omaha and the Women’s College World Series at ASA Hall of Fame Stadium in Oklahoma City close out the spring season NCAA national championships. The NCAA Frozen Four is held in April each year for NCAA Hockey.

35 events are listed on the Charlotte 49ers athletics schedule. The Charlotte 49ers vs. East Carolina Pirates matchup is currently one of the last sporting events on the university's athletics calendar. Truist Field - Charlotte at 324 South Mint, Charlotte, NC will be hosting this game. Fans can browse the 24 tickets currently on sale for the event with prices starting at $36.00 and reaching a maximum price of $65.00.

When do Charlotte 49ers tickets go on sale?

Charlotte 49ers tickets for each sport that the university offers will be available a few months ahead of the season start date. TicketSmarter’s virtual ticket office will have updated event listings for each game of the season with tickets becoming available as soon as possible.

The Charlotte 49ers campus has several state-of-the-art sports venues to accommodate the athletics programs on campus. The campus contains a football stadium, multi-sport arena and a ballpark stadium for baseball and softball. NCAA Division I FBS stadiums will hold around 15,000 to over 100,000 fans depending on the university. Football stadiums at the FCS level hold between 2,200 and 69,000 fans.

NCAA Division I college basketball arenas are often used for other sports such as wrestling and volleyball. These arenas can hold as few as 1,000 fans and upwards of 35,000 fans. NCAA DI ballparks also come in all shapes and sizes. They can hold less than 1,000 spectators or over 24,000 fans. TicketSmarter’s virtual box office tools will feature an accurate Charlotte 49ers seating chart for every team and game.

Jerry Richardson Stadium is located on the Charlotte 49ers campus at 9201 University City BLVD, Charlotte, NC and serves as one of the university’s home sports venues. TicketSmarter’s Jerry Richardson Stadium seating chart is an easy way to see which seating sections have tickets available. When buying your Charlotte 49ers vs. East Carolina Pirates tickets, be sure to explore all of your options on the Truist Field - Charlotte seating chart!

TicketSmarter makes it easy to buy Charlotte 49ers tickets throughout the year. We have developed a safe and secure web platform that creates a worry-free experience for customers. The TicketSmarter website and app uses the highest security standards in the ticketing industry to ensure your personal information remains protected during all online ticket transactions.