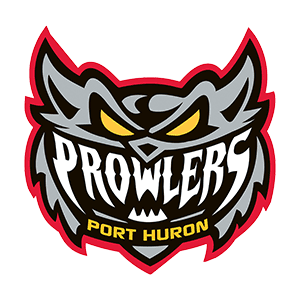 Get ready for an action-packed hockey game with Port Huron Prowlers tickets from TicketSmarter! The Port Huron Prowlers are a minor league hockey team that is located in Michigan. The Prowlers were founded in 2015 and compete in the Federal Prospects Hockey League. As a team in the FPHL, the Prowlers help develop players that are looking to continue their hockey careers in the ECHL, AHL or NHL. The Prowlers are the only FPHL team located in Michigan and will travel to the states of New York, Delaware, Connecticut and North Carolina during the season to play away matchups.

The Port Huron Prowlers have had a lot of success during their time in the FPHL. They won the league’s championship in their inaugural season by sweeping the Danbury Titans in a best-of-five series. The Prowlers continued their success in the following seasons, making it to the playoff finals in 2018 and the semifinals in 2019. Fans can catch a Prowlers home hockey game at McMorran Arena, which has been the home of the team since their inaugural season. Score your Port Huron Prowlers tickets at TicketSmarter!

There will be a variety of factors that impact Port Huron Prowlers ticket prices. Some of the variables that will affect the price of tickets during the season include the team's performance on the ice, upcoming opponents and seating location inside the arena. Playoff hockey tickets will also be significantly more expensive than regular season tickets.

How much are Port Huron Prowlers tickets?

Seats for most Port Huron Prowlers games will start in the $15 to $30 range. Seats that are closer to center-ice tend to have higher prices.

Port Huron Prowlers tickets for games during the current hockey season are found in a price range between $30.00 and $147.00, while the average price of tickets for a single game this season is around $41.00. The Port Huron Prowlers vs. Mississippi Sea Wolves hockey game on December 15th, 2022 at 7:00pm is next up on the schedule for the team. There are 1123 tickets available for the game, which will take place at Raising Cane's River Center Arena, 275 South River Road, Baton Rouge, LA. Ticket prices for this matchup are starting at $31.00 and go as high as $147.00.

The Port Huron Prowlers schedule will consist of over 50 regular season games. The FPHL regular season schedule begins in October and ends in April. Some of the teams that the Wolves will face off with include the Watertown Wolves and Binghamton Black Bears. The FPHL Commissioner’s Cup Playoffs will begin shortly after the conclusion of the regular season and feature the top four teams from the Eastern and Western divisions. The playoffs will consist of multiple best-of-three series with quarterfinals, semifinals and championship rounds.

The Port Huron Prowlers schedule currently has 2 hockey games remaining to be played during the season. Get your Mississippi Sea Wolves vs. Port Huron Prowlers tickets to see one of the last games currently on the team’s schedule. The game will be played on January 2nd, 2023 at 7:00pm and will take place at Raising Cane's River Center Arena, 275 South River Road, Baton Rouge, LA. Wanting to grab tickets for this exciting matchup? Grab one of the remaining 1163 tickets currently for sale in the price range of $30.00 to $147.00!

When do Port Huron Prowlers tickets go on sale?

Port Huron Prowlers tickets will go on sale shortly after the FPHL season schedule is announced. Avoid the lines at the box office and get your FPHL tickets at TicketSmarter.

McMorran Arena is the home of the Port Huron Prowlers. The arena is located inside the McMorran Place Sports & Entertainment Center at 701 McMorran Blvd, Port Huron, MI 48060. The seating capacity of the McMorran Arena for Prowlers hockey games is 2,200. In addition to the Prowlers, McMorran Arena has hosted various other minor league hockey teams dating back to 1962 and has also hosted arena football teams throughout the years.

The Port Huron Prowlers seating chart features a horseshoe design with seating along the sides of the ring and around the east end of the arena. Section 11 is located behind the Prowlers’ bench, while section 9 is behind the visiting team’s bench. Sections 10 and 12 on the McMorran Arena seating chart are located at center ice on the opposite side of the arena behind the penalty boxes. The east end seating includes lower and upper-level sections.

Fans of the FPHL can safely and securely buy their Port Huron Prowlers tickets at TicketSmarter. We provide an easy-to-use web platform that creates a worry-free online hockey ticket buying experience. Customers can buy legitimate tickets for all FPHL regular season and postseason games. Skip the box office lines and get your Port Huron Prowlers hockey tickets in advance at TicketSmarter.

All TicketSmarter tickets are 100% guaranteed. Verified customers rate TicketSmarter 4.6/5.0 stars, so you can order with confidence knowing that we stand behind you throughout your Port Huron Prowlers ticket buying experience.