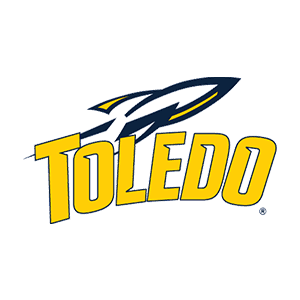 Root for the Rockets this season with Toledo football tickets from TicketSmarter! The Toledo Rockets football team represents the University of Toledo in the NCAA Division I Football Bowl Subdivision. The Rockets are members of the Mid-American Conference and compete in the West Division. The University of Toledo fielded their first football team as a varsity sport in 1917. The Rockets have an intense football rivalry with the Bowling Green Falcons that dates back to 1919.

The Toledo Rockets joined the Mid-American Conference in 1952 and have won more than 10 MAC titles. The Rockets football team has also competed in over 15 NCAA college bowl games including victories in the Boca Raton Bowl and Military Bowl. Toledo football home games are played at the Glass Bowl, which has been the home of the team since 1937. Purchase your Toledo football tickets at TicketSmarter to catch all of the action on the gridiron this season!

Toledo football ticket prices will vary throughout the season. Big games against MAC opponents, teams from one of the Power Five conferences or nationally-ranked opponents will typically have higher ticket prices than other games on the schedule. Other factors that will affect the price of tickets include the seating location at the stadium and the number of games left in the season.

How much are Toledo football tickets?

Fans looking for Toledo Rockets Football tickets during this season will find them in a price range from $9.00 to $2146.00, while $96.00 is currently the average price of tickets per game. Illinois Fighting Illini vs. Toledo Rockets tickets are currently available for the upcoming game at Memorial Stadium - IL on September 2nd, 2023 at TBD. There are 48 tickets currently available for this game on TicketSmarter. The cheapest tickets for the game are starting at $56.00, while premium seating options are going for prices as high as $108.00.

The Toledo football schedule will begin at the end of August or the beginning of September. The Rockets will typically start their football season with four non-conference games. The team will then begin playing in-conference games against MAC opponents like the Eastern Michigan Eagles and Northern Illinois Huskies. Toledo can earn the chance to play in the MAC Football Championship if they finish first in the West Division of the conference. The Toledo Rockets can also earn the opportunity to compete in a postseason bowl game if they’re able to win at least six games during the regular season.

Fans have 4 games left on the Toledo Rockets Football schedule to see the team play live! Make your plans now to be at the UMass Minutemen vs. Toledo Rockets game at Warren Mcguirk Alumni Stadium, One Stadium Drive, Amherst, MA on October 7th, 2023 at TBD. 20 ticket listings are available for the game on TicketSmarter with prices ranging anywhere from $56.00 to $64.00.

When do Toledo football tickets go on sale?

Toledo football tickets will usually go on sale in July. Fans may be able to purchase Rockets football tickets for certain games at an earlier date on TicketSmarter’s virtual ticket office.

Glass Bowl Stadium at 1745 Stadium Dr, Toledo, OH 43606 is the home of Toledo’s football program. The team has played at the stadium since 1937 when it was known as University Stadium. The original stadium had a seating capacity of 8,000, but the seating capacity now sits at 26,038 after several expansion and renovation projects. The Glass Bowl seating chart has a horseshoe-shaped bowl and an additional upper level of seating on the visiting team’s sideline.

Fans wanting to have the best seats in the house should look for tickets in section 5, which is located on the 50-yard line behind the Rockets bench. The Toledo sideline spans from section 1 through section 10. End zones seats on the Toledo football seating chart are available in section 10 through section 18. The visiting team’s sideline spans from section 19 to 27, with sections 30 through 38 making up the upper level.

TicketSmarter wants you to have an easy and worry-free experience when buying Toledo football tickets online. As the official ticket resale partner of the MAC, we provide a safe and secure web platform for all NCAA collegiate athletic events. We use the highest standards in the ticketing industry to ensure your personal information remains protected during all ticket transactions.

All TicketSmarter tickets are 100% guaranteed. Verified customers rate TicketSmarter 4.6/5.0 stars, so you can order with confidence knowing that we stand behind you throughout your Toledo football ticket buying experience.