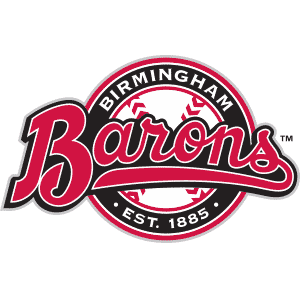 See another great season of Minor League Baseball with your Birmingham Barons tickets from TicketSmarter! The Birmingham Barons are a Double-A MiLB team based in Alabama. There have been several iterations of the team dating back to 1892. The current franchise was founded in 1981, first serving as an affiliate of the Detroit Tigers and then becoming the Double-A affiliate of the Chicago White Sox in 1986. The current franchise competed in the Southern League from 1981 until they joined the Double-A South league in 2021.

Teams playing under the Birmingham Barons name have won several league championships, division titles and pennants. During their time in the Southern League from 1981 to 2020, the Barons won seven division titles and six Southern League championships. The Barons are also notable among sports fans as the minor league team that Michael Jordan played for in 1994 after retiring from the NBA and attempting a baseball career. Barons fans can catch a home game at Regions Field, which serves as the home ballpark of the team. Swing for the fences this season by purchasing your Birmingham Barons tickets at TicketSmarter!

Birmingham Barons ticket prices will vary throughout the season due to numerous factors. The number of games left in the season, the team’s onfield performance, upcoming opponents and the seating location inside the ballpark will have an impact on the cost of tickets. Different seating locations in the stadium will have different price points based on fan demand.

How much are Birmingham Barons tickets?

The 2023 Birmingham Barons schedule has 138 ball games left to be played throughout the year. Chattanooga Lookouts vs. Birmingham Barons on September 17th, 2023 at 2:15pm is a highly-anticipated matchup for Birmingham Barons fans. The game will take place at AT&T Field, 201 Power Alley, Chattanooga, TN and 54 tickets are available with prices ranging from $26.00 to $917.00.

When do Birmingham Barons tickets go on sale?

Birmingham Barons tickets will go on sale in the springtime before the Double-A baseball season starts. TicketSmarter’s virtual ticket office will have tickets on sale as soon as they are publicly available.

Regions Field at 1401 1st Ave S, Birmingham, AL 35233 opened as the new home of the Birmingham Barons in 2013. The stadium replaced the Hoover Metropolitan Stadium, which had served as the team’s home since 1988. In addition to hosting Barons games, Regions Field also serves as a secondary home field of the UAB Blazers baseball team. The Regions Field seating chart has a seating capacity of 8,500 with a single level of chairback reserved seating and additional upper levels with club seating and suites.

Fans wanting the up-close and personal baseball experience should look for seats in sections 106 through 110 behind home plate. Seats behind the Barons dugout are located in sections 111 through 113, while sections 103 through 105 are located behind the visiting team’s dugout. Other options on the Birmingham Barons seating chart include the home run porch, general admission grass berm and general admission seats located in the outfield.

Baseball fans can place their trust in TicketSmarter when buying Birmingham Barons tickets. Protecting your personal information is of the utmost importance to us, which is why our web platform utilizes the highest security standards in the ticketing industry. The box office can get extremely busy on game days causing fans to have to wait in line. Get your Birmingham Barons baseball tickets in advance at TicketSmarter so you can walk right in without the hassle of waiting.

All TicketSmarter tickets are 100% guaranteed. Verified customers rate TicketSmarter 4.6/5.0 stars, so you can order with confidence knowing that we stand behind you throughout your Birmingham Barons ticket buying experience.