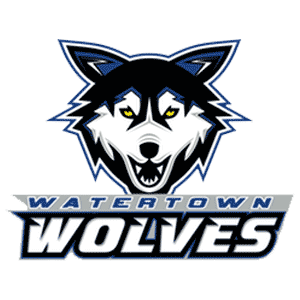 With a new name, the Watertown Wolves went on to win their first Commissioner’s Cup league championship at the end of the 2014-2015 FPHL season. The team has often been a playoff contender in the league with eight consecutive postseason appearances starting with their inaugural season. Hockey fans can catch a Watertown Wolves home game at the Watertown Municipal Arena, which is located at the Duffy Fairgrounds. Get your Watertown Wolves tickets at TicketSmarter to experience a jam-packed season of hockey!

There will be a variety of factors that impact Watertown Wolves ticket prices. Some of the variables that will affect the price of tickets during the season include the team's performance on the ice, upcoming opponents and seating location inside the arena. Playoff hockey tickets will also be significantly more expensive than regular season tickets.

How much are Watertown Wolves tickets?

Seats for most Watertown Wolves games will start in the $15 to $30 range. Seats that are closer to center-ice tend to have higher prices.

The Watertown Wolves schedule will consist of over 50 regular season games. The FPHL regular season schedule begins in October and ends in April. Some of the teams that the Wolves will face off with include the Danbury Hat Tricks and Columbus River Dragons. The FPHL Commissioner’s Cup Playoffs will begin shortly after the conclusion of the regular season and feature the top four teams from the Eastern and Western divisions. The playoffs will consist of multiple best-of-three series with quarterfinals, semifinals and championship rounds.

When do Watertown Wolves tickets go on sale?

Watertown Wolves tickets will go on sale shortly after the FPHL season schedule is announced. Avoid the lines at the box office and get your FPHL tickets at TicketSmarter.

Fans of the FPHL can safely and securely buy their Watertown Wolves tickets at TicketSmarter. We provide an easy-to-use web platform that creates a worry-free online hockey ticket buying experience. Customers can buy legitimate tickets for all FPHL regular season and postseason games. Skip the box office lines and get your Watertown hockey tickets in advance at TicketSmarter.

All TicketSmarter tickets are 100% guaranteed. Verified customers rate TicketSmarter 4.6/5.0 stars, so you can order with confidence knowing that we stand behind you throughout your Watertown Wolves ticket buying experience.