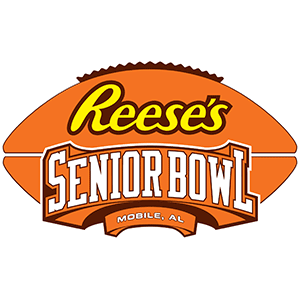 See the future stars of the NFL with Reese's Senior Bowl tickets from TicketSmarter, the official ticket resale marketplace of the Senior Bowl! The Senior Bowl is an annual college all-star football game that is played at the conclusion of the NCAA season. The event is considered the most prominent college football all-star game in the United States and is the first stage in the NFL Draft process. The first game was played on January 7, 1950, featuring two squads made up of all-star NFL Draft prospects playing at the Gator Bowl Stadium in Florida. The following year, the game moved to Mobile, AL, where it is still played today.

In 2021, a new era in the Senior Bowl's history began with the game moving to Hancock Whitney Stadium on the South Alabama Jaguars’ campus. Throughout its history, the Senior Bowl has produced over 55 players that went on to be inducted into the Pro Football Hall of Fame. The game is unique among college all-star games as the teams are coached by NFL staff. Former MVPs of the game include the likes of Dan Marino, LaDainian Tomlinson, Dak Prescott and Justin Herbert. Get your Reese's Senior Bowl tickets at TicketSmarter to see some of the best NFL Draft prospects compete on the gridiron!

There is a high demand for tickets to the Senior Bowl, which can affect Reese's Senior Bowl ticket prices. One of the main factors that will also affect the price of tickets is the seating location inside the stadium. Seats closer to the 50-yard line will be the most expensive options, while seats closer to the end zone will generally be cheaper.

How much are Reese's Senior Bowl tickets?

TicketSmarter will have various prices for Reese's Senior Bowl tickets based on the seating location at Hancock Whitney Stadium. Fans can use the seating chart to view the ticket prices by section or use the filter tool to sort tickets by price.

The Senior Bowl takes place during the NCAA college football postseason after the bowl games and College Football Playoff. The game was originally held in early January, but was later moved to mid- to late-January in the 1980s and beyond. In 2022, the game will be played in February for the first time in history, taking place on the first Saturday of the month.

During the lead-up to the game, there will be several game week events. Team practices, a player parade and a free concert are all part of the Senior Bowl festivities. Kick off for the Senior Bowl is typically set for 1:30 pm local time.

When do Reese's Senior Bowl tickets go on sale?

Reese's Senior Bowl tickets will generally go on sale shortly after the start of the college football season in mid-September. As the official ticket resale partner of the Senior Bowl, TicketSmarter will have exclusive seating options available through our virtual ticket office.

College football fans will have an incredible experience at Hancock Whitney Stadium with their Senior Bowl tickets. As the official ticket resale marketplace of the Senior Bowl, TicketSmarter provides a safe and secure web platform that makes it easy to score great seats to your next NCAA college football game. Our virtual ticket office helps fans pick out the perfect seats for this exciting college football all-star game.

All TicketSmarter tickets are 100% guaranteed. Verified customers rate TicketSmarter 4.6/5.0 stars, so you can order with confidence knowing that we stand behind you throughout your Senior Bowl ticket buying experience.