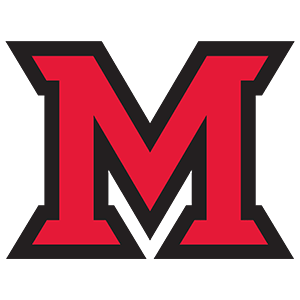 Don’t wait to watch the RedHawks take on top-tier teams in the Mid-American Conference and grab your Miami (OH) Football tickets today! The RedHawks have remained consistently competitive since they were first formed, holding an all-time record of 684–455–44 and earning 12 bowl game appearances.

Miami (OH) has a rich football tradition that began all the way back in 1888 when they fielded their first-ever collegiate level, football squad. Since then, the RedHawks have earned 8 division titles, 22 conference championships, as well as a 7-5 record in bowl contests. The team’s most impressive postseason run came between the 1973 and 1975 seasons, with the RedHawks winning three straight bowl games in that span.

Miami University is famous for producing several successful head coaches, earning the nickname "Cradle of Coaches" as a result. The list includes iconic figures that overlap multiple generations of football, such as Paul Brown, Jim Tressel, John Harbaugh, and Sean McVay. Other notable Miami (OH) football alumni include NFL players like Brandon Brooks of the Philadelphia Eagles and Ben Roethlisberger of the Pittsburgh Steelers, as well as Pro Football Hall of Famers Sid Gillman and Weeb Ewbank. Miami (OH) Football tickets don’t last long so be sure you grab yours with TicketSmarter and enjoy another season of RedHawks football!

Miami (OH) Football ticket prices can depend on a variety of factors. The quality of the opponent and your seat location will be especially important. Match-ups featuring in-state rivals like the Cincinnati Bearcats or the Ohio Bobcats typically have a large demand and therefore command a higher price. Use TicketSmarter to easily secure your RedHawks tickets.

How much are Miami (OH) Football tickets?

RedHawks football tickets generally cost around $44 for a single game, but seats can be secured for possibly as low as $4 depending on the match. Seats for traditional bleacher-style seating may start around $20 to $35 per ticket, while premium bench back seats in sections 3 to 5 range at about $40 to $55. Grab Miami (OH) tickets with ease by using TicketSmarter.

Fans looking for Miami (OH) RedHawks Football tickets during this season will find them in a price range from $9.00 to $394.00, while $52.50 is currently the average price of tickets per game. Bahamas Bowl: UAB Blazers vs. Miami RedHawks tickets are currently available for the upcoming game at Thomas Robinson Stadium on December 16th, 2022 at 11:30am. There are 8 tickets currently available for this game on TicketSmarter. The cheapest tickets for the game are starting at $360.00, while premium seating options are going for prices as high as $360.00.

The NCAA Division I football regular season generally begins in late August or early September and concludes in December. Miami (OH) will host an average of five or six games per season at Yager Stadium in Oxford, OH. The RedHawks will typically welcome four MAC foes as part of their home schedule lineup, including teams like Bowling Green, Kent State, and Northern Illinois. Also be sure not to miss their annual non-conference rivalry match-up with Cincinnati. The MAC Championship will take place in early December, followed by a postseason bowl game in early January should they qualify.

Fans have 1 games left on the Miami (OH) RedHawks Football schedule to see the team play live! Make your plans now to be at the Bahamas Bowl: UAB Blazers vs. Miami RedHawks game at  Thomas Robinson Stadium, Bahamas Games Blvd, Nassau, BS on December 16th, 2022 at 11:30am. 8 ticket listings are available for the game on TicketSmarter with prices ranging anywhere from $360.00 to $360.00.

When do Miami (OH) Football tickets go on sale?

Typically, the Miami University football schedule is released shortly after the conclusion of the previous season in January. Single-game tickets will be available for purchase later in the summer. Be sure to also check whether the RedHawks earned a spot in a bowl game. Tickets for those contests will be available soon after the NCAA postseason slate is announced in December.

The RedHawks have reliably called Yager Stadium their home since 1983. Due to the successes of the football program, Miami University has constantly authorized a series of facility improvements, beginning in 2003 with the addition of a FieldTurf playing surface. Featuring a seating capacity of 24,286, the stadium’s layout consists of west and east grandstands, a small set of bleachers in the north end zone, and no seats in the south end zone under the main scoreboard. Check out sections G, H, and 4 for a spot near the 50-yard line, and sections N and O for the best view of the end zone. Use TicketSmarter’s interactive seating chart to find your ideal spot to watch the RedHawks in action.

TicketSmarter is a safe and secure platform for fans to purchase live sporting event tickets, providing peace of mind while you shop. Our website is designed to provide you with a hassle-free ticket buying experience. We guarantee you will receive valid Miami (OH) Football tickets just as if you purchased them at the ticket office.

All TicketSmarter tickets are 100% guaranteed. Verified customers rate TicketSmarter 4.6/5.0 stars, so you can order with confidence knowing that you have our total support throughout your Miami (OH) Football tickets purchasing experience.