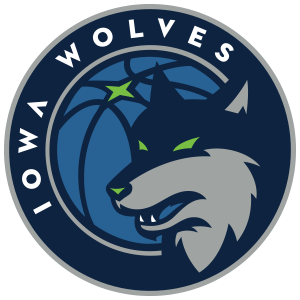 Get ready for a high-intensity basketball game with Iowa Wolves tickets. Formally known as the Iowa Energy from 2007-2017 until they were purchased and renamed by the Minnesota Timberwolves, are an American professional basketball team based in Des Moines, Iowa. They play in the Western Conference in the NBA D-League, a minor league basketball organization, and play at the Wells Fargo Arena.

On February 27, 2007, the D-League granted Des Moines, Iowa an expansion franchise for the 2007-2008 season as one of the four new clubs. The team was owned and operated by Iowa Basketball, LLC at the time. The team then went on to hire former Northern Iowa player Nick Nurse as the first head coach. Iowa Energy initially held a naming contest for the team. The choices listed on their website were Corn Cobs, Maize, River Rats, Scarecrows, and Thoroughbreds.

However, on June 29, 2007, the owners announced the name Iowa Energy. The logo was an orange basketball above the word "energy" and the team's colors were purple, orange, and red. The Chicago Bulls and the Miami Heat were named as the team's NBA affiliates. It was reported on January 23, 2017, that the Minnesota Timberwolves would be purchasing the Energy to become their D-League affiliate for the 2017–18 season. The relationship between the Timberwolves and the Wolves is the second between Minneapolis and Des Moines, as the NHL's Minnesota Wild and AHL Iowa Wild.

It's time to get into the exciting live-action with Iowa Wolves tickets and see why they keep breaking attendance records all across the league.

Iowa Wolves ticket prices vary based on the venue, seat selection and opponents. Fans seated closer to the court should expect to pay more than those at the back of the venue. Playoff and championship games may cost significantly more than standard games. Check out the seating options available and pick your seats to the next Iowa Wolves game.

How much are Iowa Wolves tickets?

Iowa Wolves ticket prices can start around $15 depending on the game, seats you select and home venue. For example, the average ticket price for the NBA’s Philadelphia 76ers at the Wells Fargo Center in 2019 was around $70. For the 2019 FIBA Basketball World Cup in China, group phase team pass tickets ranged from $228 to $965. The average price for the WNBA’s New York Liberty tickets was around $40. Use our filters to compare prices and get your basketball tickets.

During this current season, Iowa Wolves tickets can be found at prices as low as $21.00, while the more expensive tickets can reach prices up to $226.00. The average ticket price per game this season is around $62.33. Next up for the Iowa Wolves is the Iowa Wolves vs. Grand Rapids Gold basketball game on December 9th, 2022 at 7:00pm. 32 tickets are available on TicketSmarter’s event listing for the game, which will take place at Wells Fargo Arena - IA, 730 3rd Street, Des Moines, IA. Ticket price for the game will start at $20.00 and premium seats will cost up to $34.00.

Basketball is popular on an international level and has been hosted at venues all over the world. Iconic basketball venues for NBA basketball include Madison Square Garden in New York City (NY Knicks), Little Caesars Arena in Detroit (Detroit Pistons) and TD Garden in Boston (Boston Celtics). The 2019 FIBA World Cup was hosted at venues like Wukesong Arena in Beijing and Shanghai Oriental Sports Center in Shanghai. Playoff games for the 2019 NCAA Basketball tournament were hosted at venues like the Capital One Arena in Washington D.C. and the Honda Center in Anaheim, CA. Our event calendar will help you find Iowa Wolves game dates.

When do Iowa Wolves tickets go on sale?

Iowa Wolves tickets go on sale as soon as the season schedule is announced. Basketball is one of the top sports in the world and games are highly demanded by fans. Don’t wait until the last minute to find your seats to the next basketball game.

Fans can use the Wells Fargo Arena - IA seating chart to pick out the best seats for the Iowa Wolves vs. Lakeland Magic game on March 25th, 2023 at 7:00pm.

Customer security is very important. We are devoted to keeping your personal data private. We aim to provide you with a secure buying experience each time you shop with us. Simply purchase your basketball tickets and download them right onto your mobile device. Shop with peace of mind as you search for the next Iowa Wolves game.

TicketSmarter gives a 100% guarantee on all our sporting event tickets. You will receive valid Iowa Wolves tickets just like you would get at the box office. Verified customers rate us 4.6/5.0 stars. Order for a quick and seamless checkout.