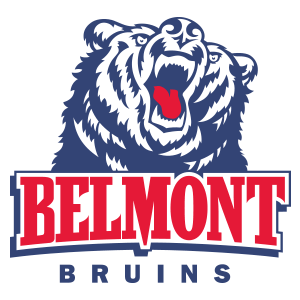 Grab your Belmont Bruins tickets at TicketSmarter, the official ticket resale marketplace of the Belmont Bruins! The Bruins are the sports teams that represent Belmont University in NCAA Division I competition. The Belmont athletics programs are members of the Ohio Valley Conference where they compete in various sports. Belmont University sponsors 17 varsity sports on campus, eight men’s teams and nine women’s teams. The Bruins' main rival across all sports is the Lipscomb Bisons, due to Lipscomb also being located in Nashville.

Belmont offers a large variety of sports with the most popular teams on campus being the Belmont basketball, baseball and soccer teams. The Belmont men’s and women’s basketball teams have been mainstays in the NCAA March Madness Tournament since the mid-2000s and have both won numerous conference championships during the same time period. The Belmont baseball team has qualified for the NCAA Division I Men’s Baseball Tournament multiple times along with winning several conference tournaments. The men’s soccer team is an outlier in the Belmont athletics program as they play in the Southern Conference instead of the OVC. Secure your Belmont Bruins tickets today to cheer your favorite team on to victory!

Fans researching Belmont Bruins ticket prices will find that prices vary from sport to sport. The most popular spectator sports on campus will have higher ticket prices due to a higher demand. Other factors that will impact the price of tickets include how well the teams are performing this year, upcoming opponents and the sports venue hosting the upcoming game.

How much are Belmont Bruins tickets?

Belmont basketball tickets will usually start as low as $20. Due to the team’s success the average price of a Belmont Bruins basketball ticket is around $95. Other Belmont sporting events will generally have cheaper ticket prices.

Belmont Bruins fans can attend a large number of the sporting events that occur on the Belmont campus or on the road at away games. During the fall sports season, fans will often enjoy volleyball and soccer matches held from August through November. The men’s and women’s basketball teams will take to the court starting in November and they will both play through March. In-conference basketball games against fellow OVC universities will start taking place in January. The spring sports season will see the Belmont Bruins participating in baseball and softball games from February through May.

When do Belmont Bruins tickets go on sale?

E. S. Rose Park is one of the most well-used sports facilities for the Belmont Bruins as it serves as the home to the Belmont baseball, soccer, track and softball teams. The park underwent an $8 million renovation project in 2010, which allowed it to be used for a variety of sporting events. Baseball games at E. S. Rose Park can accommodate 750 fans, while soccer and track events can hold 300 spectators and softball games have a capacity for 250 fans.

TicketSmarter is the official ticket resale marketplace of the Belmont Bruins and the Ohio Valley Conference. We offer authentic Belmont Bruins tickets for all major sporting events. Our web platform was built with the highest security standards to ensure your personal information remains protected while buying Belmont athletics tickets online. Skip the long box office lines on game day and get your tickets in advance through TicketSmarter!

All TicketSmarter tickets are 100% guaranteed. Verified customers rate TicketSmarter 4.6/5.0 stars, so you can order with confidence knowing that we stand behind you throughout your Belmont Bruins ticket buying experience.