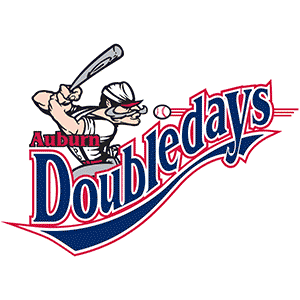 See some of the top professional prospects in college baseball this summer with Auburn Doubledays tickets from TicketSmarter! The Auburn Doubledays are a collegiate summer league baseball team that is based in Auburn, New York. The team was founded in 1958 and played in the Minor League Baseball system as a member of the New York-Penn League. During the team’s time as a Class A Short Season MiLB ball club, the Auburn Doubledays were affiliated with several different major league teams including the Washington Nationals and Toronto Blue Jays. The team started out as an affiliate of the New York Yankees from 1958 to 1961 and the New York Mets from 1962 to 1966.

The Auburn Doubledays were a highly successful minor league team, winning 15 divisional titles and eight NYPL league championships. Major League Baseball restructured the minor league system in 2020, which led to the Doubledays becoming a college summer team and joining the Perfect Game Collegiate Baseball League in 2021. As a member of the PGCBL, the Doubledays compete in the league’s Central Division against teams like the Watertown Rapids and Adirondack Trail Blazers. Score your Auburn Doubledays tickets at TicketSmarter today!

Auburn Doubledays ticket prices vary based on the seat selection and their upcoming opponents. The number of games left in the season will also affect the ticket prices on game day. Prices are subject to increase on the day of the game. Use TicketSmarter to check the seating availability and pick out your seats for the next Auburn Doubledays game.

How much are Auburn Doubledays tickets?

Auburn Doubledays baseball tickets will generally start in the $15 to $20 range. Fans are able to buy tickets in advance through TicketSmarter’s virtual ticket office or on game day. Game day tickets may be limited and are subject to price changes.

As part of the Perfect Game Collegiate Baseball League, the Auburn Doubledays will play a 48-game schedule during the summer. The 48 games on the Doubledays schedule will be evenly split between home and away games. The season will take place over eight weeks starting around early June and conclude near the end of July or early August. The team will play several games throughout the week including weekdays and weekends.

The Auburn Doubledays are members of the PGCBL’s Central Division and will primarily play against other opponents in their division. Some of the teams that the Doubledays will face include the Mohawk Valley DiamondDawgs and Utica Blue Sox.

When do Auburn Doubledays tickets go on sale?

Auburn Doubledays tickets go on sale shortly after the Perfect Game Collegiate Baseball League season schedule is announced. The players in the league are college prospects with hopes of playing in the major leagues and fans can keep track of each player's journey through the summer season. Avoid the lines at the box office and get your PGCBL tickets at TicketSmarter.

Falcon Park, also known as Leo Pinckney Field at Falcon Park, is the home of the Auburn Doubledays. The ballpark is located at 130 N Division St, Auburn, NY 13021 and is the second iteration of the stadium at that location. The original Falcon Park opened in 1927 and served as the Doubledays home field from 1958 to 1994. The original ballpark was demolished after the 1994 season and replaced with the modern facility in time for opening day in 1995. The modern day Falcon Park seating chart has a seating capacity of 2,800 across two levels of seating.

The lower level of Falcon Park is known as the Premium Box seating area, while the upper level has the Center Reserved and general admission seating sections. Sections 105 and 106 are behind home plate on the lower level, while Section 206 is behind home plate on the upper level. Dugout seats behind the Doubledays are located in sections 108 and 109, while sections 102 and 103 are behind the visiting team’s dugout. Additional seating areas on the Auburn Doubledays seating chart include the party deck in right field and the party pavilion in left field.

TicketSmarter offers a simple and worry-free experience when buying Auburn Doubledays tickets. We offer baseball fans a safe and secure web platform for all online ticket transactions. Your personal information is of the utmost importance to us, which is why we built our website using the highest security standards in the ticketing industry. Customers can skip the lines at the box office and buy their baseball tickets in advance at TicketSmarter.

All TicketSmarter tickets are 100% guaranteed. Verified customers rate TicketSmarter 4.6/5.0 stars, so you can order with confidence knowing that we stand behind you throughout your Auburn Doubledays ticket buying experience.